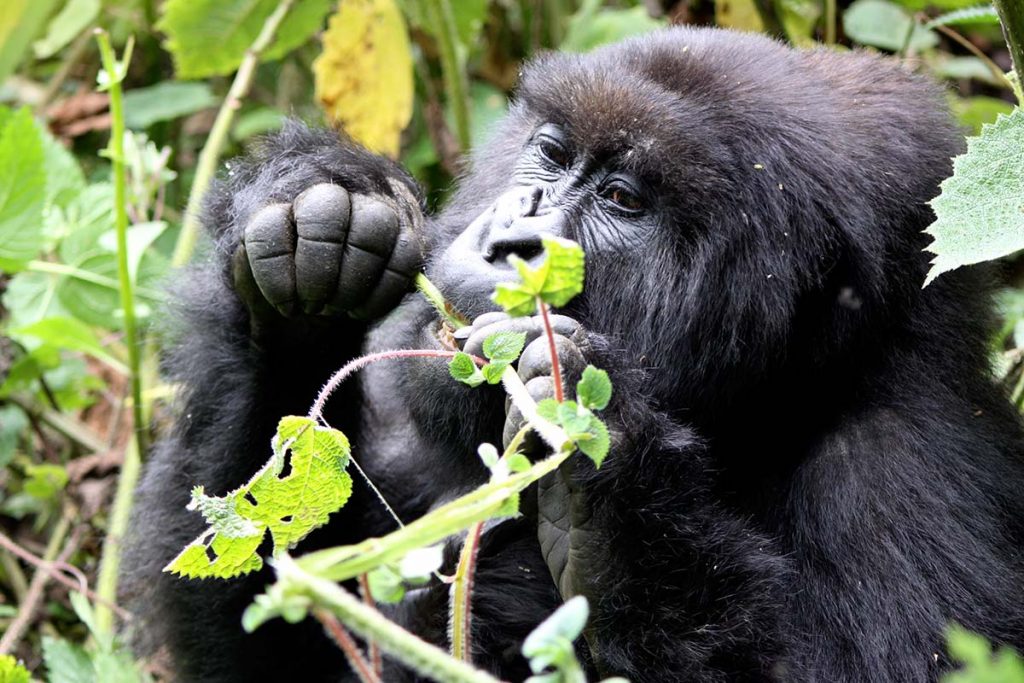 The African Continent is blessed to have four gorilla sub-species using their verdant and dense rainforests, thus making it a perfect place to undertake gorilla tracking. Gorilla Tourism forms a crucial nature-based industry drawing thousands of travellers from across the World to the dense rainforests, thus providing significant income to surrounding local communities in addition to promoting the protection of Great Apes within their natural habitats.

Your hands have to be washed with soap and water before entering the forest for gorilla trekking tours to reduce any possible chances of spreading diseases.

Avoid depositing rubbish within or close to mountain gorilla natural habitats because these act as breeding places for disease-causing germs.

Only visitors with valid gorilla permits are allowed to trek the mountain gorillas in their natural habitats and this is done to avoid cases of underage gorilla trekking, over-crowding and so much more.

Don’t approach these Great Apes closer than a certain distance. Maintain a minimum of 7 meters away from the mountain gorillas and it is totally illegal to approach them for fear of infecting them with contagious diseases that also affect humans, given the fact that we are related to these Great Apes. Gorillas, especially infants are naturally curious but when they approach you, it is advisable to slowly move back while maintaining the recommended distance.

Similarly, do not touch or feed these endangered mountain gorillas because it also increases chances of spreading diseases to the Great Apes.

One hour is the recommended watching and photography time in the presence of the Giant Apes. However, the Park Ranger might abandon or prematurely end any interactions with endangered mountain gorillas as any sigh of the Giant Apes becoming irritated, overwhelmed and charged.

Your loud noise is likely to disturb other wildlife, birds and butterflies in the Gorilla Natural habitats. For this reason, keep voices low while searching for the Great Apes and spending time in their presence.

Refrain from trekking the mountain gorillas if you are sick (especially with flu, measles, Tuberculosis and cough) because these endangered creatures are surprisingly related to human beings thus likely to be affected by almost the same diseases that affect mankind.

You must not enter the jungles to trek mountain gorillas if not 15 years and above. This limitation to age was placed for three main reasons-gorilla treks are generally physically demanding for young children hence they are likely to delay gorilla trekking adventures. Also, it is difficult to predict a child’s reaction to a gorilla charging as they might scream or cry instead of keeping calm, then the other reason is the fact that children have higher chances of spreading air-borne diseases that adversely affect these great Apes.

Refrain from directly looking into the eyes of mountain gorillas because they will most likely perceive it as trying to challenge them in a fight. If you accidentally stare into their eyes and they start charging, follow the Park Ranger’s guidelines that include pretending to be one of them by eating on vegetation, slowly moving backwards and crouching. At this point, the mountain gorillas especially the silverback will become at ease and not see you as a threat.

Try as much as possible to avoid rapid and sudden movements while observing the mountain gorillas because you are likely to scare them into retreating/hiding in the thick vegetation.

It is totally unacceptable to eat, smoke or drink while in the presence of these Great Apes for fear of spreading diseases from food/drink leftovers in addition to making them curious and getting closer to you. Remember that they are extremely intelligent animals that learn by imitating.

Flash photography is not permitted during mountain gorilla trekking because it is likely to scare these calm and gentle creatures, or making them aggressive and defensive.

Always make sure that you have a clean handkerchief, to be used when coughing or sneezing. This is applicable to visitors who suddenly develop the urge to sneeze or cough and if you ever find yourself in such a situation, it is advisable to first turn away from the mountain gorillas. You would be preventing the spread of germs to these beautiful and endangered creatures in their natural environment.

What happens when you get the urge to answer calls of nature? First, travellers are always advised to first use the toilet before beginning gorilla treks for fear of getting caught unaware but if need be, a small hole of about 30 centimeters deep will be dug and covered after use because here are no toilets in the middle of the forest.