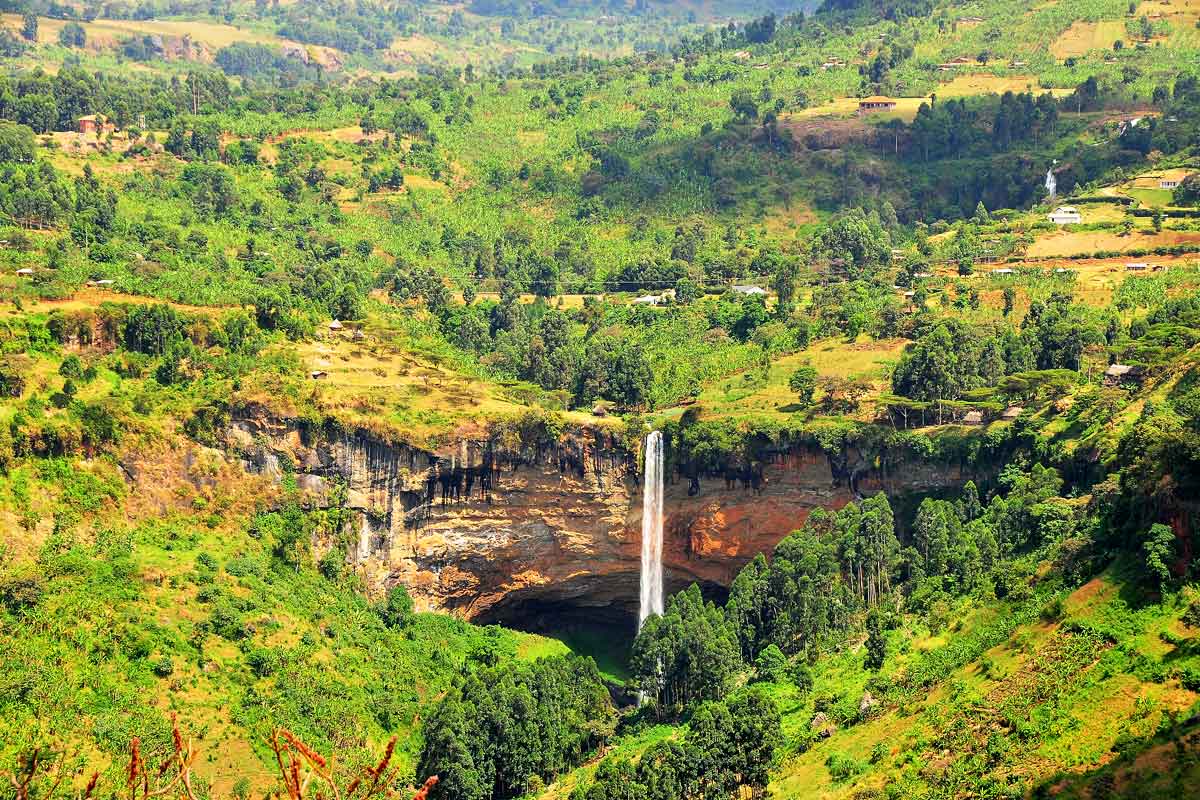 This is an extinct volcano located on Uganda’s eastern border. Mount Elgon National Park boasts numerous interesting features including gorges, ancient caves, waterfalls at Sipi and hot springs. Birdlife is abundant on the mountain and various wildlife varieties may also be encountered.

At 4,000km² Mt. Elgon has the largest volcanic base in the world. Located on the Uganda-Kenya border it is also the oldest and largest solitary, volcanic mountain in East Africa. Its vast form (80km in diameter) rises more than 3,000m above the surrounding plains. The mountain’s cool heights offer respite from the hot plains below, with the higher altitudes providing a refuge for flora and fauna.

Mount Elgon National Park is home to over 300 species of birds, including the endangered Lammergeyer. Smaller antelops, forest monkeys, elephants and buffalos also live on the mountainside. The higher slopes are protected by national parks in Uganda and Kenya, creating an extensive trans-boundary conservation area which has been declared a UNESCO Man & Biosphere Reserve.

A climb on Mt. Elgon’s deserted moorlands unveils a magnificent and uncluttered wilderness without the summit-oriented approach common to many mountains: the ultimate goal on reaching the top of Mt Elgon is not the final ascent to the 4321m Wagagai Peak but the descent into the vast 40km²caldera.

Mount Elgon’s slopes are riddled with caves left by moving lava and erosion of soft volcanic deposits. The most accessible are Kapkwai Cave, near the Forest Exploration Centre, and Khauka Cave on Wanale Ridge. Historically, such features acted as shelters for locals and their livestock; later on they provided manure in the form of bat droppings. More recently, they were used by climbers and their porters, and even today, campsites are still located at Hunters Cave, Siyo Cave (near the hot springs), Mude Cave and Tutum Cave – ideal for overnight expeditions.

Jackson’s Pool stands at 4,050m and is a natural pool with shallow waters. This pool lies in the shadow of the 4,165m high Jackson’s Peak, a free-standing volcanic plug rising from the western flank of the mountain. These features were named after the explorer Frederick Jackson, who in 1889 was the first European to climb Mount Elgon. The peak is used by the locals as a spot to communicate with their ancestors.

The Peaks and the Caldera

The Caldera was formed as a result of magma being drained from the chamber. When it could no longer support the overlying volcanic cone, it collapsed into a depression-like shape. In the eastern corner of the caldera, hot springs are found at the start of the deep Suam Gorge. In the northwest, Simu Gorge was formed by the sheer weight of the water in the caldera cutting two stream beds out of the weak volcanic ash and agglomerate walls.

Mt. Elgon’s vegetation is banded into broad zones whose characteristics are dictated by altitude and rainfall. The lower mountain slopes are covered with dense forest and regenerating forests, hung with vine-like lianas, epiphytes and lichens. The floor is covered with a carpet of ferns, orchids and flowering plants.

The zone changes to mixed bamboo at 2,500-3,000m. The bamboo merges into open woodland dominated by hagenia abyssinica and African rosewood interspersed with hypericum – a giant form of St. John’s wort.

The summit of the mountain is vegetated by rare Afro-montane species that include giant forms of lobelia and groundsel.

Nkokenjeru Ridge is a distinctive finger of forest extending outwards from the main massif of Mount Elgon. It lies at an elevation of 2,347m and covers a 25km-long tongue of lava that flowed out of the side of the volcano after the cone collapsed to block the main vent. Nkokenjeru Ridge culminates at the superb Wanale Cliffs which tower above Mbale Town; the seasonal Nabuyonga and Namatyo Waterfalls are located here. A trail at this western end of the ridge leads you to Khauka Cave where petrified wood can be found. This ridge also offers grounds for those interested in paragliding over the Mbale town.

The Nabuyonga Trail is a 5km loop with birding, fauna and flora. Viewpoints overlook Mbale town, Lakes Kyoga, Bisina and Salisbara, and the rugged mountains in Karamoja region. On a clear day, you may enjoy vistas of Wagagai peak and even areas of western Kenya. Beware of throwing a stone into the Nabuyonga stream – local folklore claims that if you do so, a thunderstorm will strike before you leave!

Birds whose Ugandan range is limited to Mount Elgon include the Jackson’s Francolin and Black-collared Apalis. Among those limited to just a few mountains in eastern Uganda are the Black-shouldered Kite and Tacazze Sunbird. Mount Elgon is one of the few places in Uganda where the endangered Lammergeyer can be seen, soaring above the caldera and Suam Gorge.

Lucky hikers in Mt Elgon will enjoy being amongst the parks primates, birds and rare tree species. Trails lead past caves, viewpoints and waterfalls, with the option of camping overnight on the mountain slopes.

The 7km (four-hour) mountain bamboo trail to Kapkwai Cave passes through tropical and bamboo forest. Along the trail are many primates, birds and rare trees such as Elgon teak and Elgon olive. The 5km walk to the Chebonet Falls and 3km walk to the Kapkwai caves follow the ridge view trail. There is also an 11km hike to the Tutum Cave, with the option of camping overnight beside the cave.

In Wanale, a visit to Khauka Cave takes three to four hours. Alternatively you can go to the viewpoint through Nabuyoga loop where you can see Jackson’s Summit and Wagagai peak.

Rock climbing takes place outside the park at Sipi. There are 14 climbs requiring various levels of rock scaling techniques, and all equipment can be hired from the Sipi Falls Tourist Guides Association. The toughest is a 35m climb while the easiest is 15m. Both command a picturesque view of the main falls and the Karamoja plains.

The northern and western sides of Mount Elgon rise in a series of massive basalt cliffs, often several kilometres in length, over which the mountain’s rivers plunge as beautiful waterfalls.  The best known are the three waterfalls at Sipi on the Kapchorwa road, just outside the park. The lowest of these falls is the most spectacular as it cascades over a 100m cliff. The second, known as Simba, plunges 69m over the entrance to a cave. Visitors can stand in the cave and enjoy a view of the back of the falls. The third waterfall, also known as Ngasire, gushes over an 87m high ridge. Sipi Falls is less than an hour’s drive from Mbale on a paved road.

Easily accessible waterfalls are also found at Sisiyi, Bulago, Chebonet and Wanale and many more are scattered across the mountain, offering spectacular views.

Outside the park overlooking Sipi Falls is the hill where, during the 1960s, Chemonges Kingo, King of the Sabiny would meet his subjects. From the top you can view the three falls, the Karamajong plains and the Wagagai peak.

Rock paintings found at various sites within the Matheniko Bokora Wildlife Reserve are believed to date back over 3000 years and were created by the Kushite and Nilotic peoples.

65km north of Mbale, the Nyero Rock Paintings are the finest of several rock art sites in the region. Three panels are found within the extensive granite outcrop of Moru Ikara, 10km from Kumi Town and 55km from Mbale on the Soroti road. The most impressive is Panel Two which includes two canoes bearing human figures.