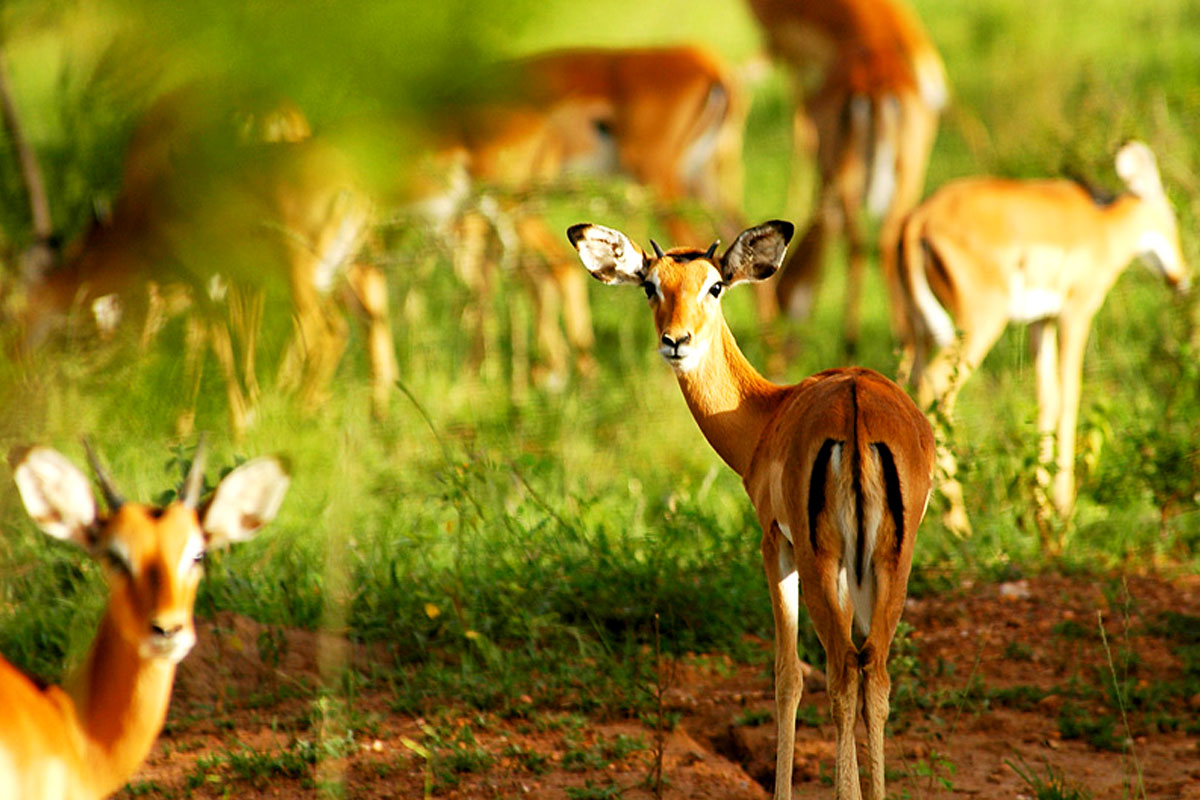 Situated between the towns of Masaka and Mbarara, Lake Mburo National Park is a compact gem, located conveniently close to the highway that connects Kampala to the parks of western Uganda. It is the smallest of Uganda’s savannah national parks and underlain by ancient Precambrian metamorphic rocks which date back more than 500 million years. It is home to 350 bird species including the marabou stock and the crowned crane as well as zebra, impala, eland, buffalo, oribi, defessa waterbuck, leopard, hippo, topi, crocodile and reedbuck.

Together with 13 other lakes in the area, Lake Mburo forms part of a 50km-long wetland system linked by a swamp. Five of these lakes lie within the park’s borders. Once covered by open savanna, Lake Mburo National Park now contains much woodland as there are no elephants to tame the vegetation. In the western part of the park, the savanna is interspersed with rocky ridges and forested gorges while patches of papyrus swamp and narrow bands of lush riparian woodland line many lakes.

Rwonyo is the center for tourism activities in the park. It is the starting point for nature hikes, quad biking, game drives and forest walks. There is also a small shop selling handcrafts and books.

Though small, this tract of forest on the western side of Lake Mburo provides a taste of tropical high forest with a closed canopy and a viewing platform for visitors. It is home to a variety of forest birds; commoner species include the Harrier Hawk, Green Pigeon, Narina Trogon, Grey-backed Cameroptera and Double-toothed Barbet. Rubanga can be explored with a ranger guide.

There are several tracks on the eastern hinterland of the park where a variety of animals and birds can be seen. A hilltop viewpoint offers panoramic vistas of the park and its five lakes.

The park’s varied habitats support 68 mammal species. Rarities include impala, which, in Uganda, only lives in Lake Mburo, and Burchell’s zebra and eland which are found only here and in Kidepo. Other species include warthog, buffalo, oribi, Defassa waterbuck and reedbuck. Leopard and hyena are also present while crocodile and over 300 hippos are found in the lake. Previously extinct in the park, lions have recently been sighted again.

Around 350 bird species have been recorded to date. These include the Red-faced Barbet, only seen in Lake Mburo, the endemic African Finfoot and the rare Shoebill. Other key species are the Papyrus Yellow Warbler, Saddle-billed Stork, Brown-chested Lapwing, African-wattled Lapwing, Carruther’s Cisticola, Tabora (Long-tailed) Cisticola, African Scops Owl, Abyssinian Ground Hornbill and White-winged Warbler. Acacia woodland bird species are especially well represented, while forest species may be found in Rubanga forest. These include Blue-breasted Kingfisher, Hairy-breasted Barbet and Yellow-rumped Tinkerbird, among others.

Unusually, the whole park is open to walkers as long as they are accompanied by a ranger guide. At Rwonyo, a guided walk leads to a salt lick where many animals are attracted to the salty rocks.

Walks on the western side of the lake begin at 7am and take two hours. At this time of day, you may encounter hyenas returning to their dens and hippos retreating to the lake. Hikes through the woodland provide an opportunity to sight forest birds and mammals, while the walk to the top of the hill rewards visitors with a spectacular view of 9 of the region’s 14 lakes.

Of particular interest to walkers and birders is Rubanga Forest, which may be visited by prior arrangement and in the company of a ranger.
All walks should be booked in advance.

Horseback safaris are an exciting way to view wildlife, including eland and buffalo. Also commonly sighted are warthog, topi, impala, duiker, bushbuck, waterbuck and zebra. The four-hour hacks take visitors up to hilltop viewpoints with the option of bush breakfasts or sundowners. This activity is arranged at Mihingo Lodge.

The wildlife-rich eastern banks of Lake Mburo can be explored during a tranquil two-hour boat voyage. Keep an eye out for crocodiles, buffaloes and hippos as well as colorful Kingfishers, magnificent Fish Eagles, Hammerkops and their enormous nests and even the prehistoric-looking Shoebill. Voyages depart from Rwonyo jetty every two hours (subject to demand) starting at 8am.

Lake Mburo contains around six species of fish, with tilapia being the most common. The designated fishing spot is at Mazinga; visitors planning to fish here should carry their own equipment and obtain a permit from Uganda Wildlife Authority.