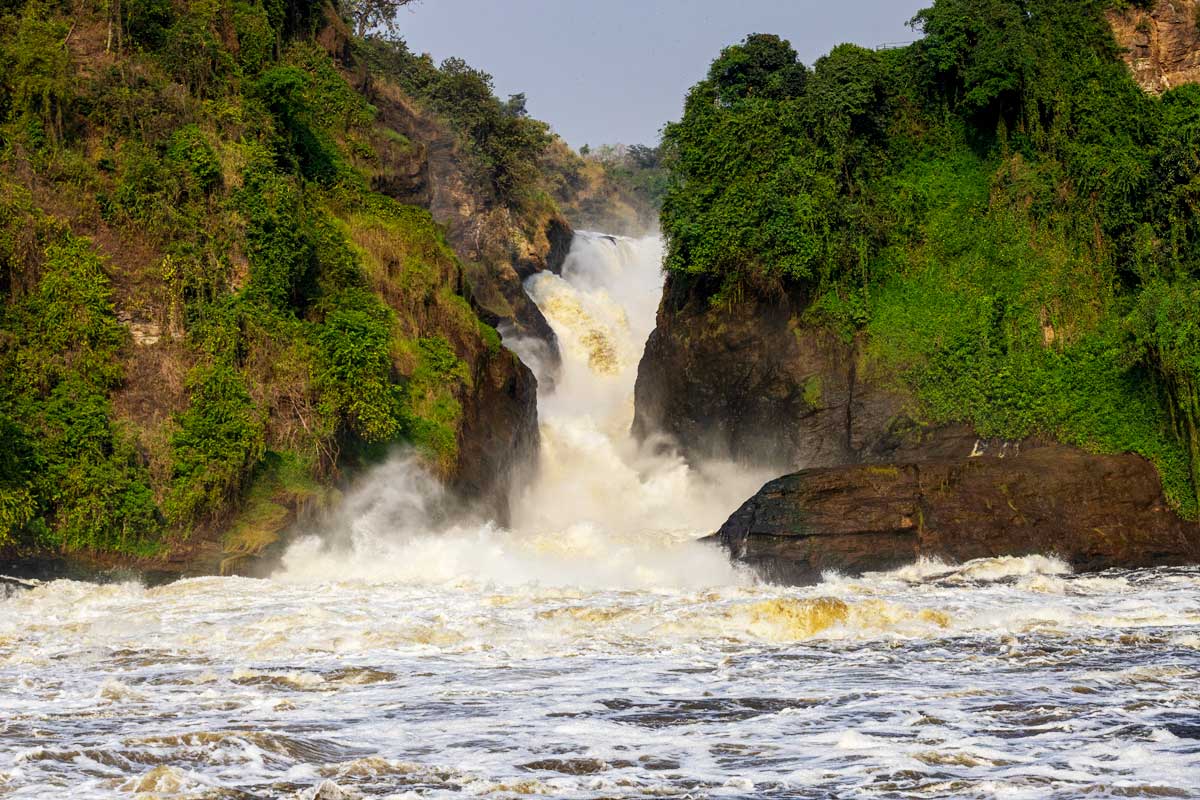 First gazetted as a game reserve in 1926, Murchison Falls National Park is Uganda’s largest and oldest conservation area, hosting 76 species of mammals and 451 birds. This is the largest National Park in Uganda – covering 3,480 sq km – and one of the most spectacular in Africa. The park is bisected by the Victoria Nile, which plunges 45m over the remnant rift valley wall, creating the dramatic Murchison Falls, the centerpiece of the park and the final event in an 80km stretch of rapids. The mighty cascade drains the last of the river’s energy, transforming it into a broad, placid stream that flows quietly across the rift valley floor into Lake Albert. A cruise upstream the Nile to the Falls is an unforgettable experience. This stretch of river provides one of Uganda’s most remarkable wildlife spectacles. On the banks, prolific wildlife including elephant, crocodile, hippopotamus, lion, giraffe, buffalo, and countless antelopes and birds can be observed.

Murchison Falls is characterized by eternal war between rock and water. The waters violently compress through a narrow gorge, spraying misty droplets along their wake over a 50m radius. This creates a permanent rainbow over the battlefield and causes a continuous roar. From Baker Point on the southern side, you can also view the Nile splitting into the smaller Uhuru Falls, created in 1962 when the river burst its banks.

A boat ride along the Nile to the foot of Murchison Falls is a rewarding experience for nature lovers, as the northern bank teems with a variety of mammals, birds and reptiles. Guided nature walks along both the north and south banks are another refreshing activity, and sport fishing is also possible here. Rafting will be available starting in 2012.

This wide, calm stretch of water, where the tranquil Victoria Nile flows into Lake Albert, is a key area for bird watchers. Its papyrus-lined banks are bursting with birdlife, including Goliath Herons, Great Egrets, and African Fish Eagles. The most sought-after species here is the rare Shoebill.

The Buligi game tracks, stretching between the Victoria and Albert Niles, are the Murchison Falls National Park’s most popular safari destination. At around 120-170km in length, they pass through open savannah grassland, woodland, acacia and riverine vegetation. Most of the park’s game can be viewed here, especially during early morning and early evening tours.

Paraa, meaning home of the hippo in the local Luo language, is the park’s tourism hub. All the park’s access roads converge here as the northern and southern banks are linked by a passenger ferry, and several accommodations are located nearby. Additionally, a museum and gift shop can be found on the north bank, and most game drives, launch trips and nature walks commence here.

The Karuma Falls are located in Chobe, in the northeastern sector of the park. These roaring waterfalls on the Victoria Nile are made up of a series of natural rock formations which cause the waters to ripple and give them a white, foamy appearance. It is an ideal area for sport fishing.

In the south of Murchison Falls Conservation Area, this forest ecosystem contains black-and-white colobus and blue monkeys, olive baboons, and a habituated chimp group which can be tracked. Elephants, buffalos, lions and leopards are also frequent visitors. Many forest birds can be viewed here, including the chocolate-backed kingfisher, white-thighed hornbill and Puvel’s illadopsis which is found nowhere else in East Africa. Kaniyo Pabidi has a campsite, cottage accommodation, forest walks and excellent bird watching.

Surrounded by savanna and covering just 4km2, Rabongo Forest is considered a birders’ paradise because of the endangered species found here. Rabongo is ideal for educational tours as it provides opportunities to identify animals, birds, medicinal plants and trees. For relaxation, visitors can camp and enjoy picnics by the Wairingo River.

Budongo Forest, which lies south west of the Murchison Falls Conservation Area is astonishingly biodiverse, with 24 mammal species, over 360 birds, 289 butterflies and 465 plants. All the forest’s tree species are on display along the “Royal Mile”, a beautiful stretch of road highly regarded for its bird watching. Budongo is also known for its primate population, which includes around 800 chimpanzees. Forest walks are possible at Busingiro Ecotourism Site on the Masindi-Bugungu route to Murchison Falls National Park.

The park is home to 76 species of mammals including four of the “Big Five”, with huge herds of buffaloes and elephants, well-camouflaged leopards and a healthy population of lions. It is also known for its giraffes; in Uganda these can only be viewed here and in Kidepo Valley. Other species viewed regularly along the game tracks include Jackson’s hartebeest, bushbucks, Uganda kob, waterbucks and warthogs. Resident crocodiles and hippos as well as other, visiting wildlife are found along the river.

Olive baboons are common along the roadsides. Blue and red-tailed monkeys and black-and-white colobus can be found in the forested sectors. The savanna-dwelling patas monkey is only found here and in Kidepo Valley National Park. Around 800 chimpanzees live in the Kaniyo Pabidi and Budongo Forests.

Activities in the park

Both the game drives and the launch trips offer an opportunity for one to come across distinct birdlife, including savannah forest birds, water birds and Albertine Rift endemics. The commonest species found in the plains include the Marabou Stork, Abyssinian Ground Hornbill, Secretary Birds, Black-bellied Bustards, Open-billed Storks and Widow Bird.

Closer to the river where there are more thickets and woodlands, the commonest bird varieties include the Swallow-tailed and Red-throated Bee-eaters – particularly in the Nyamusika Cliffs; Woodland, Pied, Giant and Malachite Kingfishers; Francolin; Hornbills, Grey heron; Hamerkop; Shrikes; Flycatchers; Cuckoos; Woodpeckers; Crombecs and Warblers. The riverbanks are also home to ducks, geese, stilts and plovers.

The park’s main birding attraction is the Shoebill, best sighted in the dry season from January-March.

Mubako Cultural Campfire Performances – The remote community of Mubako is located beside the sprawling savannah of Murchison Falls National Park. The village is a cluster of traditional thatched huts around a clearing, where villagers gather to escape the midday sun under the shade of a large tree. Mubako’s small craft shop sells carved wooden sculptures and hand-woven items made by community members. At dusk, the local cultural groups perform vibrant songs and dances around the campfires of local lodges, accompanied by the beautiful sound of he adungu. Originating from this region, this instrument is made of cowhide and twine, and the harmonies of the various-sized adungus against the backdrop of a Nile sunset are magical. There are few economic opportunities in this region and the climate makes farming hard, but with the money generated through tourism, the community can buy produce from local markets, pay school fees and support a nursery for 90 children.

Boomu Women’s Group – The subsistence farmers from the villages of Kihaguzi and Kigaragara in Uganda’s dry northern region had little produce left over to sell, so in 1999 the Boomu Women´s Group was formed, with the aim of reducing poverty and malnutrition, and providing an income for the members to be able to pay their children´s school fees. What began as a craft group has evolved into a wonderful community tourism project, with traditional accommodation, a restaurant, unique guided tours and a well-tended garden.

The scenic village tour reveals the features of everyday rural life, as well as explaining the hardships facing the community. Your guide will show you various crops as well as taking you to visit the village blacksmith. Storytellers share tales about customs and the local way of life, and a visit to the nursery, a cooking demonstration or a basket weaving class can be arranged on request.

Game Drives
A game drive around the Buligi game tracks on the northern bank with a trained ranger guide is a fantastic way to see and photograph the wide range of animals in the Nile Valley. Visitors will marvel at herds of buffalos, dozens of elephants, warthogs and towering giraffes, along with bushbucks, reedbuck, duikers, kobs, oribi and the unusual-looking hartebeest. Your guide will have a good idea where the lions are hiding, and you may even spot a leopard at dusk!

Hiking and Nature Walks
The vast landscapes and varied scenery of Murchison Falls National Park and the surrounding Conservation Area can be explored on foot. Trails through Kaniyo Pabidi and Rabongo Forests provide sightings of many primates and birds, while around the Nile-Lake Albert Delta, two- to four-hour guided swamp walks offer possible sightings of the Shoebill when the water level is low. After an afternoon boating upriver, you can also hike 45 minutes through woodland to the top of Murchison Falls for a completely different experience of this magnificent waterfall.

This is an experience that brings all the senses into play: watch waves of white water tumble hypnotically through this six-meter chasm, listen to the roar, taste the spray on your face and feel the rock shake beneath your feet. Sheer sensory overload! If you don’t fancy the trek to the top, stop off at the north bank during your game drive, and walk down a set of steps to stand within meters of the rapids.

Birders and nature lovers can enjoy short treks starting from Sambiya River Lodge or Mubako Junction, both on the south bank, or a walk along the north bank from Paraa, passing the Emmy River. All walks last from one and a half to two hours.

Launch Trips
The launch trip upstream from Paraa presents an astonishing display of wildlife and culminates with the memorable frontal view of the Falls. The launch departs at 9am and 2pm daily and takes three hours.

Recommended for birders is a morning cruise downstream to the Nile-Lake Albert Delta, providing the best chance in Africa of sighting the elusive Shoebill. This four- to five-hour return voyage also takes in a variety of other wildlife, including hippos, elephants and many birds.

A tranquil sundowner boat cruise at 5.30pm offers the classic view of an equatorial sunset reflected on the river.

Sport Fishing
The banks of the Nile below Murchison Falls provide exciting challenges to anglers. Living within strong currents and highly oxygenated water is the Nile perch. There is the chance to land a massive catch – the record is 108kg!

Fishing is permitted in designated sites and places and prior booking is recommended. Interested sport anglers are urged to bring their own equipment and secure a permit from UWA.