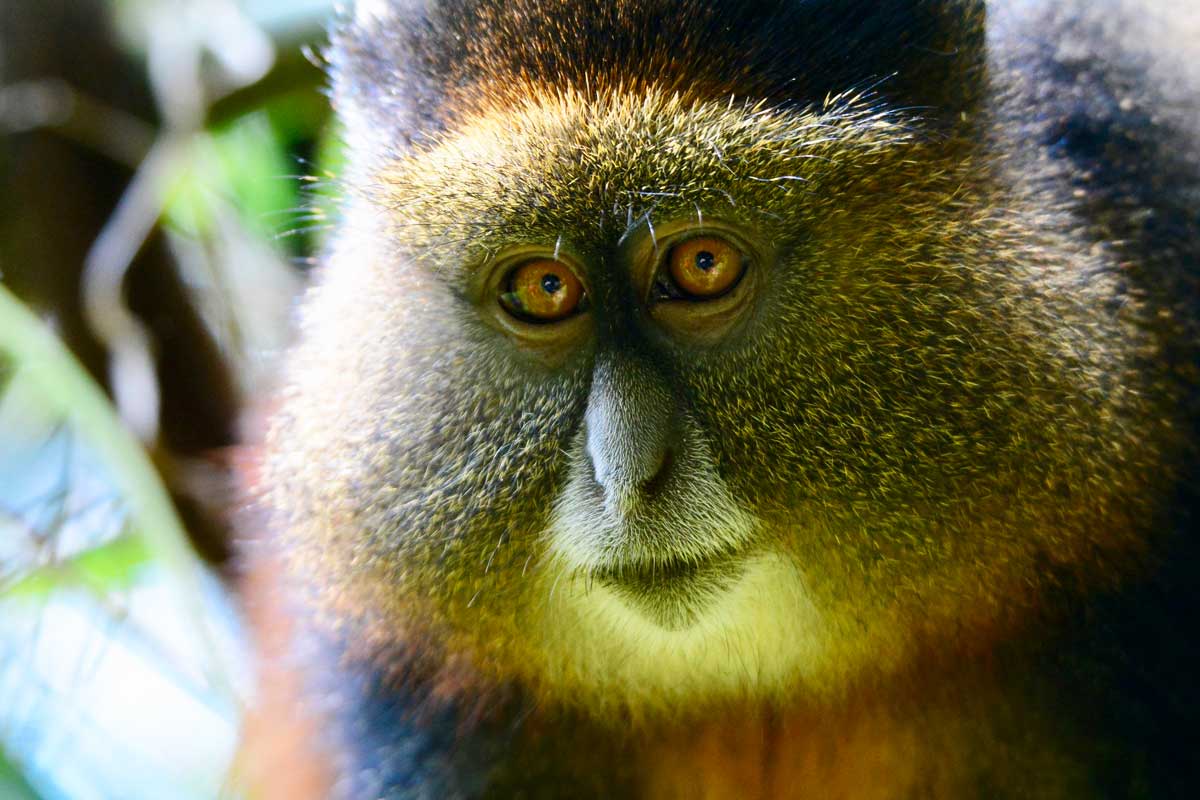 Mgahinga Gorilla National Park is yet another haven for the persecuted mountain gorilla. Located on the slopes of the Virunga Mountains in the extreme southwest corner of Uganda, the park has been set aside to provide a secure habitat for the gorillas. Mgahinga Gorilla National Park sits high in the clouds, at an altitude of between 2,227m and 4,127m. As its name suggests, it was created to protect the rare mountain gorillas that inhabit its dense forests, and it is also an important habitat for the endangered golden monkey. As well as being important for wildlife, the park also has a huge cultural significance, in particular for the indigenous Batwa pygmies. This tribe of hunter-gatherers was the forest’s “first people”, and their ancient knowledge of its secrets remains unrivalled. Mgahinga’s most striking features are its three conical, extinct volcanoes, part of the spectacular Virunga Range that lies along the border region of Uganda, Congo and Rwanda. Mgahinga forms part of the much larger Virunga Conservation Area which includes adjacent parks in these countries. The volcanoes’ slopes contain various ecosystems and are biologically diverse, and their peaks provide a striking backdrop to this gorgeous scenery.

The Virungas are a chain of eight volcanoes which dot the borders of Uganda, the Democratic Republic of the Congo and Rwanda. Three of the conical peaks are in Uganda’s Mgahinga Gorilla National Park:

Muhavura (4,127m) is the highest of the peaks in Mgahinga Gorilla National Park. The name means guide, and the Batwa used to look for its high peak to help orient themselves in the forest. Muhavura has a crystal clear crater lake about 36m wide at its summit. The top commands panoramic views far into Uganda, Rwanda and along the length of the Virunga chain

Mount Gahinga (3,474m) is the smallest of the Virunga volcanoes. It is named after the local practice of tidying the volcanic debris that clutters local farmland into neat cairns – or gahinga.  Its swamp-filled crater is around 180m wide.

Sabinyo means old man’s teeth, a reference to its jagged summit which is dissected by deep gorges and ravines. The countries that share the Virungas – Uganda, Rwanda and the DR Congo – meet on the highest of Sabinyo’s stumpy peaks.

Mgahinga is home to the habituated Nyakagezi gorilla group – a fairly nomadic bunch that have been known to cross the border into Rwanda and the Congo. The family includes the lead silverback Bugingo who is around 50 years old and father to most of the group; his silverback sons, Mark and Marfia; and two blackbacks, Rukundo and Ndungutse, who love to pose and play in the trees. The two females, Nshuti and Nyiramwiza, both have babies Furraha and Nkanda respectively.

The endangered golden monkey is endemic to the Albertine Rift, and   Mgahinga Gorilla National Park offers a rare chance to track these striking creatures, high in the dense bamboo forests on the Gahinga trail. There is an estimated 3000-4000 individuals in the Virunga area which 42-60 are habituated in Mgahinga.

Mgahinga is home to 76 species of mammals, although they are difficult to glimpse in the wild forest vegetation. They include giant forest hogs, bush pigs, forest buffaloes, elephants, bushbucks, golden cats, side striped jackals, black fronted duikers and South African porcupines.

Some of the steep mountain slopes contain caves formed by lava tubes, one of them being the famous Garama Cave located near the park headquarters. This is a sacred place for the Batwa, and during the Batwa Trail you can discover how it was used as a shelter during battles and as a place to store looted treasures.

The Visitor Centre at Ntebeko is the starting point for nature walks, volcanoes hiking, golden monkey and gorilla tracking and the short (4km) Batwa Trail. The trailhead of the long Batwa trail is at the base of Mt Muhavura. Exhibits inside the building explore themes relating the Virunga environment. A trail along the stone Buffalo Wall – built to keep animals out of neighboring farmland – provides good birding and views of the volcanoes.

A worthwhile diversion on the route to Mgahinga from Kabale, Lake Bunyonyi is dotted with at least 20 small islands and encircled by steep terraced hills, Africa’s second deepest lake is unforgettably scenic. Visitors can stay overnight at a number of lakeside resorts or simply follow the lakeshore road to Kisoro and Mgahinga.

Other good birding areas are at the bamboo belt at about 2,500m above sea level, and the tall montane forest at 2,660m. The Rwenzori Turaco is mostly sighted at around 2,700m. Along the Uganda-Congo border and on level ground, the Chubb’s Cisticola, Red-faced Woodland Warbler, Banded Prinia and Doherty’s Bush-shrike are vocal yet inconspicuous inhabitants of the tangled vegetation at the forest’s edge.

For generations, Mgahinga’s dense forests were home to the indigenous Batwa: hunter-gatherers and fierce warriors who depended on the forest for shelter, food and medicine.

When the National Park was gazetted the Batwa were evicted from the forest and they abandoned their low-impact, nomadic lifestyle. The only time they are permitted to re-enter their cherished forest is as tour guides on the Batwa Trail, on which visitors will discover the magic of the Batwa’s ancient home while enjoying nature walks and learning about the cultural heritage.

The Batwa demonstrate hunting techniques, gather honey, point out medicinal plants and demonstrate how to make bamboo cups. Guests are invited to the sacred Garama Cave, once a refuge for the Batwa, where the women of the community perform a sorrowful song which echoes eerily around the depths of the dark cave, and leaves guests with a moving sense of the richness of this fading culture.

Part of the tour fee goes directly to the guides and musicians and the rest goes to the Batwa community fund to cover school fees and books, and improve their livelihoods.

The guide leads you through the gorillas’ world, surrounded by wild forest and impressive birdlife and explaining the gorillas’ behavior along the way.

Tracking excursions normally leave from Ntebeko Entrance Gate at 8am daily and lasts between two and four hours. Visitors should please not that the Nyakagezi gorilla group moves frequently into the adjacent forests in Rwanda and DR Congo, but may only be tracked when they are in Uganda. Visitors spend a maximum of one hour with the group in order to minimize disturbance.

A hike through the forest to the deep Sabinyo Gorge – a massive gash in the flank of Mount Sabinyo – provides good birding opportunities and the chance to find the Rwenzori Turaco. This walk takes four hours, and passes through the Rugezi Swamp which is fantastic for bird watchers.

The walk to the Congo border transcends different vegetation zones. Hikers can sight the calderas on top of the Gisozi hill, look out for Kisoro and Bunagana towns and be captivated by Lake Mutanda.

The golden monkey track is a gentle steep but an interesting two-hour trek through former farmland to the bamboo forest. On a clear day, you may view the Virunga Volcano range and come across buffalo and duiker.

All three volcanoes in this park can be summited. Mt. Sabinyo, at 3,669m, takes about eight hours to cover the 14km round trip, following a steep ridge up to the peak.

It takes around six hours to ascend and descend Mt. Gahinga (3,474m), topped by a swamp-filled crater and giant lobelia. Lucky climbers may spot golden monkeys on their way through the bamboo forest.

Mt. Muhavura is the highest peak at 4,127m, and this 12km round trip takes around eight hours. Once at the top, hikers are rewarded on a clear day with views of the Virunga Volcanoes, Lake Edward, Bwindi Impenetrable Forest and the peaks of the Rwenzoris.